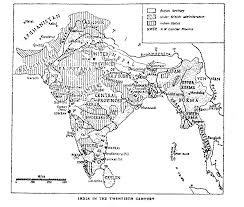 When Prophet Adam’s (peace be upon him) first foot set on the earth it was on the Indian Subcontinent & his beloved respected Eve’s on Jeddah the world has hardly knows about the undivided Pangaea which broke apart & the nations formed with streams of blood flowing & forming the line of control dividing families & heart of the children of Adam. It was the era of division & rule when new empires were formed & broke apart by the invaders during this period there was civilization which was flourishing on the banks of Indus creating & designing its own world of cultures, tradition & science, the nation which was carved by those great people was named Akhand Bharat translated later in English by traitors of British Imperials as India which it now popularly called & known as. Now the history was in the making & the world is going to know about the massive silent storm which was deepening its roots throughout the world. The veins of Indian nation are as old as the humans himself. Once called the Golden Sparrow of the world famous for her science, spices, precious gem stones & natural resources was the world leader in terms of economic output & industrialization. India is a land of mother of all civilization famed as “Indus Valley civilization”.  It is the most diverse & multicultural, multiracial nation in the world.  It is said that you will find lingual & cultural variations on every 10 kms in India. India is the land of philosophers, poets & writers. It is where Alexander lost his first battle & was died of his wounds, it is where descendants of Genghis Khan flourished & were settled down here making India center of their architecture & art. It is the land where Sufism flourished & nurtured its roots from the alluvial plains of great Indian rivers.

In the North Himalaya & Zanskar guards her Frontiers with snow covered peaks & glaciers all year round stretch your arm to the through terrain region, East one will found Arakran Mountains covred with tropical dense jungles as you moved to west the jungle goes deeper  crossing the world’s biggest river delta of Ganga Brahmaputra ending in the central plateau where driving through the most fertile alluvial plains nourished by the waters of the great rivers of Ganga & Yamuna as you move closer to the west the nature leads you towards Thar desert & salt plains of Rann of Kutch where hardly you find

a drop of water, turning yourself towards south via salt plains of Rann of Kutch Deccan Plateau welcomes you with its exotic scenery with its cousins Satpura , Vindhya, Western Ghats & Eastern Ghats where your feet will be washed by thethree crystal clear greenish waters of Arabian Sea, Bay of Bengal & Indian Ocean taking you to the all new world of advancement of completely with air becomes fresh & cool soothes you through its humid climate of varied cultures & traditions which survives on a world’s longest coastline spanning more than 7000kms. As the road ends of the mainland one can still find himself in India when he chooses to travel the distant archipelagos of Andaman & Nicobar Islands & Lakshadweep Islands.

Modern Frontiers with 7 left to wipe her tears:

After 1947 India has lost much of her ancient boundaries where it has lost Burma & Bangladesh in the east; in the west her souls torn apart by losing away Pakistan & parts of Kashmir, Gilgit, Waziristan & Baltistan losing its touch from ancient neighbours Iran & Afghanistan, in the north the story is not so different as her dry but precious land Aksai Chin which is now a part of Xinjiang province was snatched away by her once friendly brotherly ancient neighbour China & her friendly friend lost battle to China who captured Tibet sheltering his government in exile in their home away from home Dharamshala – Himachal Pradesh.  Now India only borders with China, Nepal & Bhutan in the North, Pakistan in the west, Burma & Bangladesh in east & south provides still undivided victims of British Raj i;e Thailand, Malaysia, Singapore & Indonesia through Andaman Sea, Bay of Bengal Malaca Strait, Indian Ocean. Sri Lanka & Maldives with Adams Bridge & Indian Ocean & Sea of Lakshwadeep & Arabian Sea.

When India wakes up with her lost glory there was nothing but a pledge that someday we will take our glory & respect back from this traitor world. With the introduction of constitution in 1950 when India become Republic lots of promises & policies were made which laid the foundation of the modern & prosperous India. Investments were made to build infrastructure for the looted & divided nation. By the end of 1980s & the end of cold war era India has improved a lot, once said by the First Prime Minister of India Pt. Jawahar Lal Nehru that the dams which we have build are the temples of modern India. With the introduction of economic reforms by the then Finance Minister Man Mohan Singh India opened her gates for foreign investment. Now with the result of this India by the start of 21st century has now become a booming power house who now excels in the field of Information Technology, Engineering, Software, Agriculture, Health & Medical Facilities, Education, Aero space, Bio & Nano Technology, Nuclear science. The facts show that from the mid 90s till today India has taken a huge jump forward. The dominance of India now shows & sometimes reflects in the international summits like G8, SAARC, ASEAN, UN, IAEA, WTO, BIMSTEC surviving with the burden of overpopulation whose hunger is never ending. Today India is a economic power house with the world at her feet. As per UN economic data report India will surpass the US GDP by 2050. This has not only made India a biggest challenger & threat to US but also to her neighbours.