I heard about polygamy some days ago and researched on the phenomenon, but while I was reading on this subject, I came across news that was way over the border of polygamy. I was laughing hard as I read about a man in Nigeria that has married 107 times. Today, when it is hard enough to deal with only 1 wife, I don’t understand how this man have the patience of having this much women in his home. If he goes to work outside the home and doesn’t come back before late evening then it is understandable. 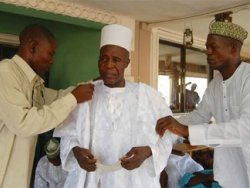 Bello Maasaba, working as a healer in Nigeria has married 107 women throughout the years. The 87 year old man has 86 wives now aged between 19 and 64 years old and he stated that he will continue to get married.

He has already divorced 12 wives because of “disobedience” and is currently looking for “Ms Right”. Maasaba had a total of 185 children but only 133 are alive and the youngest one is only 1 month old. The city of Niger is run by the Sharia law and the city administration told Masaaba 3 years ago to divorce 82 of the wife’s so that the number of wives would be 4.

We all know about examples of men in their late 70s who are spending most of their time chasing women and girls. Hugh Hefner and the famous Silvio Berlusconi who said that he was “superman” when a person stated that he needed psychology help for the problem.

Fatwa vs Reforms in Indian Muslim Society by Fahad Hussain

Start of war within:

When Indian got independence in 1947 leaders approached evry community to encourage them for their participation in forming proper national constitution. It was the time when few laws & reservations were passed on the demand & requirements of the specifc communities; in this race though suffered & torned apart by the partition Indian Muslim community was still confident that they will make it to the national liberty & will enjoy the social status which this community enjoying from

centuries. The thought priviledged section of the Indian society was then started to diminish in environment of nationalism & economic development. Tied in the useless ideologies & reserved vains Muslims contibution to the nation fell drastically & were left behind in the race of community development. When the reforms were introduced it was felt that there will be a massive change in the Muslim society but to no avail. Sikhs improved, Jains Improved, Hindus were raised from their age old boundations of caste system, Christains improved, Buddhists who were just known of their monk culture & traditions were also

moved ahead in the society but when nation looked towards its Muslim citizens they were struggling to survive & facing the threat of radicalization. Though every Indian citizen whether he or she has equal rights in the constitution the muslim society at large was never benefited from it. The reason for this is just because the system with in which neither the Islam recognise nor the society have enrooted the community as a whole which have not only affected the development of the Muslims in India but have also pushed them backward positioning them as the least productive society of India.

Indian constitution recognize the religious education & its system as per religious laws. In just 60 years millions of madarsas have sprunged up across India without having a proper strategy which can streamlined them with the national output, many religious Islamic centers have been formed, Three central universities were exclusively established but the condition remained the same & with little exception it further got deteriorated instead of growing. The major role in the demise of the Indian Muslim society was played by the clerics themselves as they have never accepted the reformed & an influential non muslim society & its culture. Every time they talk about the religious duties but what exactly the rights which Islam gives to its followers were never told clearly & specifically. The conditions now are such that even in centers of their religious sutdies like universities, madarsas, other centres hardly have proper scholars & professional efficiency rate like the education that is given in the madarsas hardly stands out as world requirement. The ideology they are taught about

is not fully transparent rather its is more dark & short sighted consising the scholars in the dark world of fundamentalism. Whenever a society wants to move forward & there is a talk of upliftment especially for women their voices started sounding out from the corners of these institutions & the Fatwa is passed without any consideration of proper Sharia & the opinion of the society. They says women should not work, they should not go outside the household, girls education is not important but they never says that women should be uplifted in the society, women must be respected & allowed to work, children at any cost must be send to school, abortions are not allowed, divorces must be prevented, jobless youths should get to work; they never fight against the odds of polygamy which though allowed but on certain rightfull conditions under sharia but now a days has become a way to get more bodily pleasure. Due to their blind perceptions the Islamic society in India has now been divided into many factions or radical school of thoughts having specific ideologies & false histrical proofs. The contidion of Indian Muslim society is deteriorated to such an extent that only 14% of muslims women contributes to the work force in the muslim society national figure is much less even lesser than the other religions, there are only 6% muslims who are qualified enough are working in the public departments. With 34% of the contibution in the national population muslims economic contirbution is hardly 5% in the national GDP. Non of the muslim politician after 1970s has made to better political ministeries.

Confined to & oftenly related to their torned vains of Pakistan, muslims just because of their low self esteemed & un acceptable care less perceptions are now being discriminated & are linked to foreign spying agnecies. This has also resulted into a various restructions in their beureucratic promotions & posistional restrictions in the institutions such as like Secret services, Armed Forces, Politics as well as in Private sector too. There is a need of proper social reforms in the Indian Muslim society where every member of it can move & stand shoulder to shoulder with others contributers. The centres of muslim education must be streamlined with the national education system. There is also need of reforms in the clerical system in India where clerics must know about the actual situation of the society & must take decision in more familiar & peaceful manner. Women in Islam always enjoyed the liberty & respect as well as in Indian society too whose law & contitution’s portion also considers & practice many sharia laws & its system exclusively for Muslim society. It is the only constitution in the world which have sections & articles & laws compatible to all the religions.  Fatwa order must be respected & circumstancial position of the society must be understand properly before issuing it. It should not be issued just in case or on the bases of personal opinion but rather it should be issued with the proper consideration of sharia & the local laws which too are compatible with the Islamic Sharia here.

Turkey. A role model for Egypt?

Turkey is regarded as a model for a regime that will strengthen the democracy, but the differences between the two countries are large. There are two large and important non Arab Muslim majority countries in the Middle East; Turkey and Iran. The possibility that the revolution in Egypt would provide the Muslim Brotherhood increased influence has led to fears in the neighboring countries that it would end up with an extremist Islamic regime just like in Iran.

Turkey and Egypt was once a part of the Ottoman Empire, but ever after it collapsed at the time of First World War, the development of the two countries has turned different directions.

The Egyptian constitution states that “Islam is the State religion” and that “The most important basis for the legislation is Islamic Jurisprudence (Sharia).” The Turkish constitution on the other hand states that the country is a secular, non-religious republic, and the basis for the state’s population. The modern day’s Turkey’s founder; Mustafa Kemal Atatürk wanted to create a modern nation. One of the examples is that the traditional headscarf was prohibited in public places and the Arabic alphabet was replaced with the Latin alphabet. The military was tasked by the government in 1961 to protect the Turkish republic’s integrity and secularism as described in the constitution something the army takes very seriously.

Both under Gamal Abdel Nasser, Anwar al-Sadat and Hosni Mubarak, Egypt as a modern state has been characterized by sole ruler to a limited extend and haven’t allowed political oppositions. Nasser was a charismatic leader and Mubarak was a leader with not much support but with a determination to rule as long as possible. Despite all the differences, we can speak about Turkey as a model because of its bright developments over the past 10 years.

The road to democratization

After being a candidate in the EU in 1999, the requirement to fulfil the Copenhagen criteria for membership weakened the military’s role in Turkey. The National Security Council, where national security policy issues are discussed, have also been reformed and now consists of more civilian members than before when there was an emphasis on military officers. An attempted military intervention was still made as in 2007 it was revealed that there existed a right-wing military network that was planning a coup.

Since March 2003, Prime Minister Recep Tayyip Erdogan and his Justice and Development Party (AKP) have been in power. It is a moderate Islamist party, such as; that wishes to go in for a Turkish EU membership. This kind of moderate form of Islamic rule won’t happen over night in Egypt and if it would happen, then it does need a better functioning multi party system.

A survey conducted by the polling institute Pew Research Center before the protest wave began, shows clear differences between Egypt and Turkey. 72% of Turks see democracy as the absolute best form of government. 50% Egyptians do the same. 85% of Egyptians believe it is positive that Islam has an influence in politics and the number in Turkey is only 38%. When it comes to Islamic extremism, 61% of the Egyptians are strongly or partly concerned about it, while in Turkey 40% of Turks feel the same. While 52% of Turks see a conflict between the forces that will modernize the society and the fundamentalists, only 31% of Egyptians think the same. These numbers show that the Egyptians do want religion to play a role, but it gets disturbed by the extremists. In Turkey, the democratic way of thinking is quite strong, and soon 90 years of separation between state and Islam seems to have entrenched themselves. Turkey is an important model not only for Egypt but for the whole Middle East as it appears as a mediator whenever the storm hits its neighbours.

This was proven when President Abdullah Gül was awarded with the 2010 Chatham House Prize in London. Abdullah Gül has been a smooth operator and described as “the first proudly observant Muslim to be head of the secular Turkish state that wants to put an end to mutterings in Western capitals about Turkey’s shift to the East.” He was contributed this prize “for his contribution both to international relations and Turkeys development as a vibrant democratic state.”
While Gül will be remembered for his positive achievements, the Arab leaders will be remembered for their dictatorship, corruption and lack of respect for democracy.