Though the 20th century‘s history was carved by Hitler & world remembers him as a Holocaust father with just looking at the darkest side of him but in the era of the bloodshed even before the first nuclear experiment started there was a hidden romance flourishing in the heart of the greatest all time villain Adolf Hitler breaking the veins from the clutches of Swastika. Though there were rumors about Fuhrer of having love relations with the two pretty ladies of the radiation era Geli Raubal & Erna Hanfstaengl but the truth is different from illusions beyond imaginations. The lady who ruled the darkest heart & the cruelest mind of history was Eva Braun. Born in Munich Germany on 6th February 1912 was a model that was in a relationship with the most powerful man of his time when she was just 17. The German public was not aware of their love relationship. 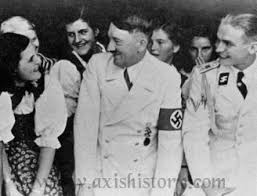 Ups & Downs: Every romance has to be tested & goes through hard times so like their one too went through. As their hearts draws closer to each other & seeks love into the each other souls the bunkers of the third Reich filled with fragrance of love when they first met at Hoffmann’s studio of Munich in October 1929. But there were moments when after Geli Raubal’s death on 18th September 1931 Hitler was just seeking loneliness which shocked him the most; changing the perceptions of Fuhrer completely igniting the new era of dark clouds with the stains of blood. It was during this time when Eva Braun started feeling lonely & attempted suicides two times.  Throughout 1930s & early 1940s Fuhrer’s household was looked after by Eva Braun situated at the Bergdorf near Berchtesgaden where they partied & enjoy evening together sometimes taking a short walks together with their beloved dogs Negus and Stasi. As the clouds of holocaust engulfed around Europe their souls become lonely. Living in the luxurious complex of her love while her heart was living in the highly fortified bunker of the Reich Chancellery Braun spoke to Speer a supporter & a close ally of Hitler memoirs while reading romance novel: that Hitler is now too busy & never try to intimate her.

The couples spent moments of their secret relationship with love & smoking cigars having fruits in the Fuhrer study where they talk about the politics of Reich & their emotions. Hitler always used to cracked jokes & tease his second half by quoting on her lipsticks, hairs & appearance. But one thing which separates them is their distinct diet as Adolf was a pure vegetarian & doesn’t like cosmetics & products made from animal by products & their body parts whereas Eva loves the reverse.

After learning about the failed assassination attempt on Hitler, Eva wrote to him: “From our first meeting I swore to follow you anywhere even unto death. I live only for your love.”

A marriage of 46 hours: A fter the failed 20 July of 1944 to kill Fuhrer, Eva joined her love at the bunker of the Reich Chancellery of the Third Reich by driving herself from Munich to Berlin in a car in early April of 1945. On 29th April 1945 Hitler made Braun his wife when the enemy was knocking at the gates when she refused to leave him insisting that she was one of the few people left loyal to him. And as they got married with their neighborhood burning they hosted a wedding breakfast for their staff & the members of the inner circle after their brief civil wedding ceremony carried out in the bunker which lasted just for 46 hours. At the final hour of their relationship Hitler & his beloved wife Eva Hitler who he lovingly used to called Frau Hitler or Fraulein Braun gave their final farewell to their staff & the members of the inner circle at 1:00pm on the afternoon of the 30th April 1945 when the members heard the gunshot after few minutes when they opened the door the bodies of the groom & bride were lying lifeless where in the room the greatest romance of the 20th century was took his last breath by ending their lives differently Hitler shot himself at his right temple by his pistol PPK7.66 & his beloved Eva sacrificing her soul by biting a cyanide capsule. With the suicide of these holocaust souls their romance had now came to an end. Braun was 33 & Hitler 56 when they commit suicide after which their souls became one though not in the real world they survived for long but as the true lovers they are now have made themselves one by dyeing together leaving the world to change & curse them since the history of romance itself is great but the end of every great love story had been the same throughout the history & that is dyeing together making the world their enemy.

Though everyone curse Hitler for his doing & the political corners curse Braun as a biggest disappointment of the history but we must not forget that the emotions also exists in the beast where in some deepest corner of their heart love lives which even in the world’s harshest days encouraged them to love each other. 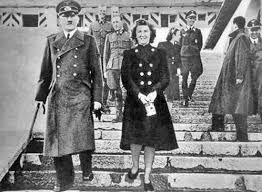